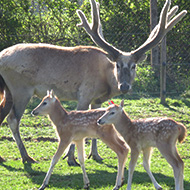 Père David deer were driven to extinction by habitat loss and hunting in the early 1900s.

ZSL Whipsnade Zoo has welcomed the arrival of 14 fawns to its herd of Père David deer, a species that is classified as extinct in the wild.

Keepers say they spotted the fawns skipping around their 'Passage through Asia' enclosure, sporting their Bambi-esque white spots on their backs.

The deer form part of the European Endangered Species Breeding Programme (EEP) - a tool used by zoos, aquariums and wildlife parks across Europe to manage conservation breeding programmes to ensure a healthy and diverse population of animals.

Zookeeper Gracie Gee said: “It’s great to see our herd growing so much this year as they are such an important group - helping to ensure the survival of this species.
“We’ve had 14 new arrivals and we all wish that our visitors were able to see them too, as they’re absolute proof of the incredible work we are doing to conserve precious species at ZSL Whipsnade Zoo.”

Père David deer were driven to extinction by habitat loss and hunting in the early 1900s. Thanks to breeding programmes like the EEP, however, they have been successfully introduced to the wild in parts of their native China.