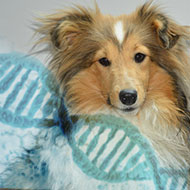 A new genetic mutation that causes progressive retinal atrophy (PRA) in Shetland sheepdogs has been discovered by researchers at the UK’s largest canine genome health bank.

The disease mutation, named BBS2-PRA, is the first to be discovered as a direct result of the Give a Dog a Genome project, led by the Kennel Club Genetics Centre at the Animal Health Trust (AHT). The team has already developed a DNA test to help identify affected and carrier dogs, which will be available from Thursday, 5 March.

“It is always exciting to discover a new mutation that causes an inherited disease in dogs because it provides a means for breeders to reduce the frequency of the mutation in future generations of dogs and, very importantly, to avoid breeding clinically affected dogs,” said Dr Cathryn Mellersh, head of the Kennel Club Genetics Centre at the AHT.

“But the discovery of the mutation that causes BBS2-PRA in Shetland Sheepdogs is particularly exciting because it is the first disease mutation we have discovered as a direct result of our Give a Dog a Genome project.”

PRA is a recognised condition within Shetland sheepdogs, but until now the mutation causing this form had not been identified. Besides PRA, dogs with the BBS2-PRA mutation have an upturned nose, an unusual coat texture which is wavy in appearance and dental defects.

The Give a Dog a Genome project utilises whole genome sequencing technology to make the mutation identification process faster and more efficient.

Previously, researchers would conduct a lengthy Genome-Wide Association Study (GWAS) to identify a region of the genome that harboured the disease mutation, followed by sequencing methods to pinpoint the causal mutation.   For a disease like PRA, this would involve using DNA from between 12 and 20 individual dogs.

Through the Give a Dog a Genome DNA database, the AHT was able to compare the DNA of just one Shetland sheepdog with PRA with the genomes of other dogs to successfully identify the mutation that causes PRA in this breed.

“Being able to identify a disease mutation from a very small number of dogs means that we can make a DNA test available much earlier in the process of disease emergence, ideally before the mutation has had the chance to become widespread throughout the breed,” explained research assent Rebekkah Hitti-Malin.

“In turn, this means that the mutation can be eliminated from the breed population more quickly, possibly within just a few generations of the DNA test being launched.”