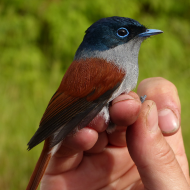 Size and distance key to determining a variety of species

A new study has revealed fresh insights into the factors that determine how many bird species can be found on any given island.

The research, published in the journal Nature, reveals how the area (size) and isolation (distance) of islands are key to determining the diversity of species they contain.

It was led by the Museum für Naturkunde in Berlin in collaboration with the University of Oxford.

In the study, researchers collected molecular data from bird species across 41 oceanic archipelagos; they aimed to see if the 1967 book, The Theory of Island Biogeography, was correct in predicting the number of species expected on any given island as a function of the area of the island and its isolation from the mainland.

Until now, no study has shown how, on a global scale, island area and isolation determine the rates at which species colonise new islands, evolve new species, or go extinct.

“This huge collaborative effort – led by Dr Luis Valente of Museum für Naturkunde in Berlin – has allowed us to create this remarkable global dataset of island birds worldwide,” explained Dr Sonya Clegg, associate professor of evolutionary ecology at the University of Oxford.

Researchers also found that the majority of island bird species represent unique evolutionary branches, with no close relatives on the islands on which they live.

“Islands are frequently associated with spectacular radiations – think of Darwin’s finches of Galápagos, where a single coloniser went on to diversify into 15 different species – but this is not the evolutionary scenario for most of the world’s island bird diversity,” said Dr Valente of Museum für Naturkunde in Berlin.

Dr Clegg added: “It will be exciting to see how this major advance for testing island biology theory on a global scale can be applied to other taxa. How will the precise shape of relationships change when looking at ants, or mammals or reptiles? These types of comparisons will answer long-standing questions about biogeographical patterns, and no doubt stimulate new avenues for research.”