Cookie use on MRCVSonline
We use cookies to ensure that we give you the best experience on our website. If you continue without changing your settings, we will assume that you are happy to receive all cookies.
Accept Policy
Change cookie settings
Australia identifies 113 species in need of ‘urgent help’ after bushfires 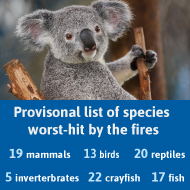 Loss of habitat had been so severe for some species that 'emergency intervention' was needed.

The Australian government has identified 113 species that will need emergency support in the weeks and months following the bushfires that ravaged the country from 2019 to 2020.

On Tuesday 11 February, the Wildlife and Threatened Species Bushfire Recovery Expert Panel published a provisional list of animal species identified by experts as ‘the highest priorities for urgent management intervention’ over the coming months.

The list includes 19 mammal, 13 bird, 20 reptile, 17 frog, five invertebrate, 22 crayfish and 17 fish species. According to the panel, almost all the species on the list had lost at least 30 per cent of their habitat in the fires.

Species were prioritised based on the amount of habitat loss they had suffered; whether they were listed beforehand as being vulnerable, endangered or critically endangered; and their vulnerability to fire based on physical, behavioural and ecological traits.

The panel stated in its report: “Many [species] were considered secure and not threatened before the fires, but have now lost much of their habitat and may be imperiled.”

Species most at risk of extinction included the Blue Mountains water skink, the Kangaroo Island dunnart and the Pugh’s frog.

Loss of habitat had been so severe for species such as the koala and the smoky mouse that ‘emergency intervention’ was needed to support their recovery.