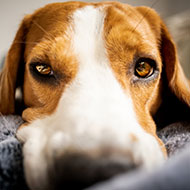 SAVSNET is urging owners and vets to manage suspected cases carefully and limit contact between affected and unaffected dogs.

The Small Animal Veterinary Surveillance Network (SAVSNET) has announced multiple reports of acute onset prolific vomiting in dogs (five or more episodes in a 12-hour period) in various parts of the UK.

Affected dogs are vomiting more frequently than is typically seen with canine gastroenteritis, but will typically make a full recovery with routine symptomatic veterinary therapy.

There is no known risk to humans, but some ‘anecdotal evidence’ suggests that affected dogs can transmit the disease to other dogs. SAVSNET is urging owners and vets to limit contact between affected and unaffected dogs, and manage suspected cases with caution.

SAVSNET states that it is currently unknown whether this is the result of a specific virus or bacteria, or whether it is part of normal seasonal variation. Both vaccinated and unvaccinated dogs can be affected.

According to SAVSNET, symptoms include:

Veterinary surgeons, nurses and dog owners seeing suspected cases are being asked to complete a questionnaire to help monitor the situation. Any owners concerned about their dog are encouraged to consult their veterinary surgeon.