Cookie use on MRCVSonline
We use cookies to ensure that we give you the best experience on our website. If you continue without changing your settings, we will assume that you are happy to receive all cookies.
Accept Policy
Change cookie settings
£3 billion funding support confirmed for farmers in time for 2020 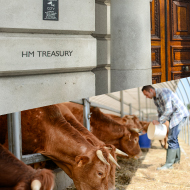 The UK will leave the CAP Direct Payments scheme in 2020, but this will be replaced by a new system based on public money for public goods.

Backing to provide certainty for farmers after Brexit

Chancellor of the Exchequer, Sajid Javid, has confirmed that UK farmers and rural communities will receive nearly £3 billion of funding for 2020. This will be used to provide support once the UK leaves the EU next year.

According to the statement, the UK will leave the Common Agricultural Policy (CAP) Direct Payments scheme in 2020. But this will be replaced by a new system based on public money for public goods.

The Direct Payments scheme provides subsidies to farmers and makes up the majority of spending under the CAP. The planned £3 billion will maintain the level of funding for Direct Payments at the same rate as 2019 and will supplement the remaining EU funding that farmers will receive for development projects until at the latest, 2023.

The Chancellor commented: “When we leave the EU and are freed from the Common Agricultural Policy, we will be able to support our vital rural communities – who are a cornerstone of life in the UK – with a fairer and less bureaucratic system.

“Farmers can enter the New Year with confidence that they have our backing and will be able to thrive after Brexit.”

The funding will be available from late 2020 and will be spread across two financial years. The allocated funding for each nation of the UK for 2020/21 is: