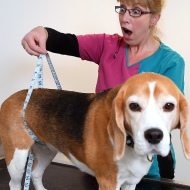 PDSA has announced the top slimmers from this year’s Pet Fit Club – a six-month diet and exercise competition with the goal of tackling the UK’s growing obesity problem in pets.

The competition is overseen by PDSA veterinary surgeons and nurses and each regime and diet is specially tailored to the animal in question.

This year six-year-old Luigi, from Newport, Wales was crowned champion as he lost 30 per cent of his bodyweight in just six months. Luigi weighed 29.10kg (4st 8lb) at the beginning of his diet. His owners cited his huge appetite and love of human treats as the reason for this weight gain.

PDSA veterinary surgeons warned that Luigi was at serious risk if he remained at this weight, so his exercise was increased and extra food was cut. Now Luigi is taken out for walks every morning and regularly joins his owner on runs and bike rides.

Owner Perrie Eedy said: “Since overhauling Luigi’s diet and exercise regime, the change we’ve seen in him has been unbelievable, he’s a different dog now! At first the weight came off slowly, but after a couple of months of being strict and really sticking to it, we noticed a big difference in him and his body shape.”

Overall Luigi lost 8.7kg (1st 5lb), as well as six inches from his chest and eight inches from his waist. Having reached his ideal weight, he will now be switching to a weight maintenance programme.

PDSA veterinary nurse at Cardiff PDSA Pet Hospital Karen Jones, who oversaw Luigi’s weight loss, said: “Luigi has undergone an incredible transformation over the last six months. He is unrecognisable from the dog that waddled into our hospital for his first Pet Fit Club weigh-in six months ago. Every month we’ve seen him slim down a little more and gradually get healthier and happier.

“His family have been very dedicated, overhauling his diet and exercise programme to transform his life. This amazing outcome is testament to what can be achieved with the right effort and support.”