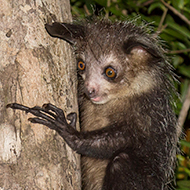 The aye-aye is considered one of the world’s strangest animals.

Researchers from North Carolina State University have discovered that aye-ayes possess tiny “psuedothumbs” which may help them to grip objects and move through trees.

The scientists were studying the tendons that lead to the aye-aye’s strange hands when they noticed that one of the tendons branched off to a small structure on the wrist.

Using traditional dissection imaging techniques, they discovered the structure comprised of both bone and cartilage, and has musculature that allows it to move in three directions - similar to that of a human thumb. The findings are published in the American Journal of Physical Anthropology.

“Using these digital techniques allows us to visualize these structures in three dimensions, and to understand the organization of the muscles which provide movement to the digit,” said Edwin Dickinson, who built the digital model of the anatomy and is the co-first author of the paper.

Co-author Adam Hartsone-Rose, said: “The pseudothumb is definitely more than just a nub. It has both a bone and cartilaginous extension and three distinct muscles that move it. The pseudothumb can wriggle in space and exert an amount of force equivalent to almost half the aye-aye’s body weight. So it would be quite useful for gripping.”

Native to Madagascar, the aye-aye is considered one of the world’s strangest animals. It is perhaps most well known for its long, slender finger that is used to find and spear grubs inside trees.

According to the researchers, the aye-aye may have developed the pseudothumb to compensate for its other, overspecialised fingers. Species such as the panda bear, for example, possess the same extra digit to aid in gripping because the standard bear paw lacks the dexterity to grasp objects.

Hartstone-Rose continues: “Some other primate species have reduced digits to aid in locomotion. The aye-aye is the first primate to dial digits up in the hand rather than dial them down. And it’s amazing that it’s been there the whole time, in this strangest of all primates, but no one has noticed it until now.”