MRCVSonline cannot control these cookies from outside sources and we advise you to check with the relevant third party for more information..
Record breeding year for hen harriers 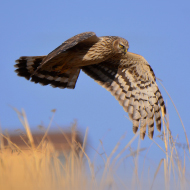 Natural England will monitor the birds’ progress as they move away from their nest areas.

A record breeding year for hen harriers has seen a total of 15 nests producing 47 chicks, according to Natural England.

Over the past two years, there have been 81 fledged chicks, compared to a total of 55 chicks over the previous five years put together. The previous highpoint was 2006, when 46 chicks were produced.

Chicks also hatched in a larger range of areas this year, including Northumberland, the Yorkshire Dales, Nidderdale, Derbyshire and Lancashire.

A wide range of organisations worked together to care for and protect the hen harrier chicks, including conservation organisations, local police, estates and their keepers, farmers and a large number of volunteer raptor enthusiasts.

Natural England will monitor the birds’ progress as they move away from their nest areas, using satellite tags that have been fitted to a high proportion of chicks.

Dr Adam Smith, of the Game & Wildlife Conservation Trust, added: “More hen harriers better distributed has been our conservation goal for many years. So the trend toward more harriers breeding successfully in the English uplands over the last two years is very encouraging. We hope successful grouse moors managing a co-existence with harriers will become a regular part of our moorland management scene.”

Natural England chairman Tony Juniper welcomed the positive news but added: “We must remember that the hen harrier is still very far from where it should be as a breeding species in England, not least due to illegal persecution.”

In February, the public body released a research paper that revealed young hen harriers in England suffer abnormally high mortality, and the most likely cause is illegal killing.

Mr Juniper pledged to work with colleagues to pursue all options for the recovery of the species.