MRCVSonline cannot control these cookies from outside sources and we advise you to check with the relevant third party for more information..
Vets perform life-saving facial reconstruction 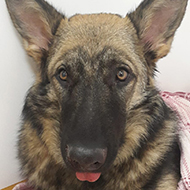 Within just two days, Bella was able to eat wet foods and did not need extra pain relief, so her owners were able to manage her pain at home.

Vets in Derby have performed life-saving facial reconstruction on a puppy that was hit by a motorbike.

Senior surgeon Rosario Vallefuoco said: “Her fur covered a lot of the damage and remarkably she wasn’t showing any neurological deficits nor had any severe injuries elsewhere. She also had no breathing issues, but she was bleeding from her nose which indicated facial trauma.”

After Bella was stabilised a CT scan of her head revealed severely comminuted maxilla-facial fractures, with her nose and part of her skull being completely displaced. In addition, small pieces of bone from her nose and skull were loose.

After two days in intensive care, surgeons began work to stabilise Bella’s jaw and palate using an interdental wire frame and dental resin. Titanium mesh was used to stabilise the fractures and rebuild her mid-face. Finally, the team removed all loose bone fragments to avoid any long-term complications.

Within just two days, Bella was able to eat wet foods and did not need extra pain relief, so her owners were able to manage her pain at home. Two weeks later, her stitches were removed, and after a further four weeks, the dental frame was also removed.

Rosario added: “Bella will have another CT scan later this month to check on her progress, but so far the mesh isn’t causing her any problems and her teeth and jaw close perfectly again. She is doing extremely well and cosmetically, you would never know she had been in such an accident.”