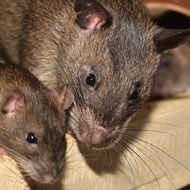 Researchers identified infected rats on or near pig farms in Yorkshire and Cheshire.

Public health officials are urging vets to be vigilant for the signs and symptoms of Seoul hantavirus (SEOV), after a study published in Vet Record (Vol 184 No 17) found the disease may be widespread in British wild rats.

Researchers identified infected rats on or near pig farms in Yorkshire and Cheshire, suggesting that SEOV may be widespread among wild rat populations in the UK. Furthermore, the SEOV strains identified in this study were found to be genetically similar to those detected in mainland Europe.

Writing in Vet Record, Jacqueline M. Duggan from Public Health England said that while the extent of SEOV transmission is not yet known, it would be ‘advantageous’ for those working with rats to be aware of the symptoms.

‘This would facilitate prompt diagnosis of hantavirus infection, thereby improving the outcome of the infected individual,’ she said.

SEOV is transmitted from wild brown rats to people via direct contact with rat excreta, such as urine, faces and saliva. Contact with rat bedding and feedstuff that are contaminated with dried rat excreta can also spread the disease.

Symptoms of SEOV in humans include headache, fever, backache, nausea and dizziness. In some people, the disease can progress to acute kidney injury requiring dialysis.

Duggan notes that while the public health risk carried by wild rats is yet to be determined, there is a known risk of infection from pet rats.

In a recent study, 34 per cent of rat owners who were tested had hantavirus-specific antibodies. Moreover, all but one of the 15 cases causing acute kidney injury since 2012 have been in people with direct exposure to pet rats or feeder rats bred on farms.

Duggan notes that chances of infection can be reduced by thoroughly washing hands and removing any clothing that might have come into contact with rat excreta.