MRCVSonline cannot control these cookies from outside sources and we advise you to check with the relevant third party for more information..
Study links behaviour issues with early death in dogs 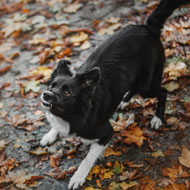 Aggression was the most common undesirable behaviour leading to death (54 per cent).

A third of dog deaths under three down to undesirable behaviour

Dogs with undesirable behaviours such as aggression or barking are more likely to die at a young age, according to new research by the Royal Veterinary College (RVC).

Using data from a quarter of a million UK dogs, researchers identified over 1,500 that had died under the age of three. Of these, 33 per cent, or 21,000, died as a result of undesirable behaviours.

The most common behaviours leading to death were aggression (54 per cent) and road traffic accidents (39 per cent), which may have behavioural aspects such as straying and poor recall.

Worryingly, over three quarters of dogs (76.2 per cent) that died from undesirable behaviours were euthanised.

Researchers said the findings highlight the importance of breeders providing good puppy socialisation, owners choosing the right breed, and careful dog training once a new pet has been acquired.

Other risk factors for earlier deaths were found to be the size, sex and breed of the dog. Crossbreeds were 1.4 times more likely to die from an undesirable behaviour than purebred dogs, while dogs under 10 kg were more than twice as likely compared to dogs weighing over 40kg.

Senior lecturer and study supervisor Dr Dan O’Neill commented: “Dogs with behaviours that their owners find unacceptable are at risk of compromised welfare, either because of their own underlying emotional motivations for the behaviour (e.g. anxiety or fear) or because of how their owners might seek to resolve the problem (e.g. the use of punishment such as beating or electric shock collars).

“Greater awareness of the scale of this issue can be the first step towards reducing the problems and making the lives of thousands of our young dogs happier.”

Image courtesy of the RVC