MRCVSonline cannot control these cookies from outside sources and we advise you to check with the relevant third party for more information..
Dog rescuer shares harrowing experiences of BSL 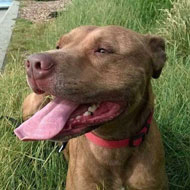 Oscar is “adorable, loyal, gentle and absolutely not aggressive”, Emma said, despite being rescued from an extremely abusive owner four years ago.

Two rescue dogs seized by police due to their appearance

Animal rescuer Emma Semple has spoken out against breed specific legislation (BSL), after her own dogs were seized under the Dangerous Dogs Act because of their appearance.

BSL makes it illegal to own four types of dog in the UK - pit bull terriers, Japanese Tosa, Dogo Argentino and Fila Brasileiro.

The government launched an inquiry into the legislation in May, following campaigns from animal welfare charities and vets, who say it has failed to protect the public and is detrimental to dog welfare.

“Adorable, loyal, gentle”
Emma, who has saved thousands of animals through her charity, Furry Friends Animal Rescue, said two of her dogs were seized by police despite never showing any aggression. The dogs, Oscar and Nellie, are both 10 years old. Emma said she has never had any concerns that they were unsafe, and was not aware they could be considered pit bull types.

“Nellie has never bitten, snarled or attacked,” she said.

Similarly, Oscar is “adorable, loyal, gentle and absolutely not aggressive”, despite being rescued from an extremely abusive owner four years ago.

“His previous owner had been seen kicking him, punching him, slapping him, throwing him down the stairs and hanging him. With all of this abuse, he never bit him. He finally bolted and ran away when his owner released a lit firework at him.”

Uncertain futures
Oscar is thought to be a cross between a Labrador and a Staffordshire bull terrier. A dog legislation officer (DLO) identified him as being ‘of type’. Nellie, who is thought to be a Staffie cross Dogue de Bordeaux, was returned to Emma after a DLO concluded he is not of type.

However, he has been severely impacted by his experiences and is “depressed, absolutely exhausted” and “frightened to go outside”.

Emma said: “When I opened the van he was dropped back, he was curled up in the tightest ball you could imagine. Scared and shut down. Each time he has to go outside he looks around the door first to make sure nobody is there… When he was taken he was desperately trying to reach me, checking every corner of his kennel to try to get back to me.”

She has raised hundreds of pounds to go to court and apply for Oscar to be placed on the exemption register, to avoid euthanasia. If he is exempted, he will be subjected to a series of tight restrictions for the rest of his life, including being muzzled and kept on a lead in public.

“Oscar is no longer available for play dates,” Emma said. “He can no longer run free and make friends… everybody will avoid him because they will assume he’s aggressive”.

Today (13 June), the Efra Committee will hear evidence from vets and dog behaviour experts, as part of its inquiry into the effectiveness of dangerous dog legislation, including BSL.