MRCVSonline cannot control these cookies from outside sources and we advise you to check with the relevant third party for more information..
Campaign launched to combat illegal dog trafficking 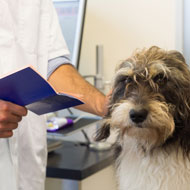 The petition calls on the government to ensure all dogs entering the UK without an owner are vaccinated for rabies.

A petition to try and stop un-vaccinated dogs entering the UK has been launched in a bid to stop illegal dog trafficking.

The Barnaby’s Law campaign is named after a dog who was purchased in the UK but later found to be in the country illegally. His owner, Nicole Macfarlane, discovered that Barnaby didn’t have any rabies documents, nor had he been wormed.

Ms Macfarlane told the authorities to highlight the issue and Barnaby was subsequently placed into quarantine. She is now calling on the government to put checks in place to ensure that all dogs entering the UK have been vaccinated against rabies and treated for worms.

'We're not against re-homing from EU, but diseases we eradicated or never had are on the increase,” Ms Macfarlane writes. 'A rabies titer test result, obtained before travel, should be required for all dogs not travelling on the pet passport scheme and within five days of their owner.'

Dog trafficking is a huge business and every year thousands of dogs from the EU are illegally smuggled into the UK. In 2017, an undercover investigation led by Dogs Trust revealed criminal breeders, vets and transporters in Hungary and Lithuania abusing the Pet Travel Scheme.

A rabies titer test is required by many rabies-free countries including Hawaii, Japan, Australia and New Zealand. In general, it is recommended that at least four weeks lapse between the rabies vaccination and blood sampling, allowing the animal to produce enough antibodies to record a positive result.

At present in the UK, a titre test is only required for animals that have entered the UK from a high-rabies country.

Under Barnaby’s Law, Ms Macfarlane is also calling for chip readers at all UK border inspection points, to prevent the possibility of fake titer results. She is also calling for all chip numbers to be checked against the FAVN (Fluorescent Antibody Virus Neutralisation) database.