MRCVSonline cannot control these cookies from outside sources and we advise you to check with the relevant third party for more information..
Alabama rot warning after dog dies in Manchester 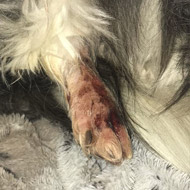 Shih Tzu Paris developed a mysterious wound on her paw after walking in Farnsworth.

Owners urged to check their dogs for sores

Vet charity PDSA has issued a warning to dog walkers after a fatal case of Alabama rot was confirmed in Manchester.

Four-year-old Shih Tzu Paris was presented to the PDSA Pet Hospital in Stretford suffering from sickness and a mysterious wound on her paw. The wound developed just days after a walk in Moses Gate, Farnsworth, and quickly became inflamed and swollen.

Blood tests revealed that Paris had kidney failure and, despite the team’s best efforts, could not be saved. Vets confirmed that she had contracted Alabama rot - a devastating disease which causes unexplained skin sores and often results in kidney failure.

Paris’ devastated owner Shannon Wilson said that she had never heard of Alabama rot and had no idea what the symptoms were.

“We are bereft after losing Paris. We couldn’t have had a more loving dog,” she said. “I want to warn other pet owners of the dangers of this disease and to take extra care when out walking. Paris was only four and has gone far too soon.”

Little known until recent years, Alabama rot damages dogs’ blood vessels, cutting off the blood supply to areas of the skin and sometimes the internal organs. Despite extensive research in the area, vets still do not understand what causes the disease or how to prevent it.

“Following this confirmed diagnosis of Alabama Rot in Manchester, vets and owners are understandably concerned. Washing any mud off your dog after a wet or muddy walk may be of benefit but this has yet to be proven as an effective method of prevention,” said PDSA vet Emma Deards.

“The important thing for owners to do is check their dogs after every walk for any unexplained redness or sores on the skin, particularly on their paws, legs, face, mouth or tongue. In many cases, the cause of these sores will not be Alabama Rot, but it’s important for a vet to examine your dog and rule it out.”

She added: “Not all dogs with Alabama Rot develop kidney failure but it’s vital to monitor suspected cases closely so we can spot and treat the signs early to give pets the best chance of survival.”