MRCVSonline cannot control these cookies from outside sources and we advise you to check with the relevant third party for more information..
Firefighters pay tribute to last 9/11 search dog 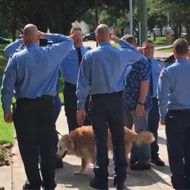 Firefighters salute Bretagne as she makes her way into the hospital to be euthanized.

16-year-old Bretagne described as 'one of a kind'

Firefighters in New York have bid an emotional farewell to the last remaining 9/11 search and rescue dog.

Bretagne, a 16-year-old golden retriever, was one of 300 search and rescue dogs deployed by Texas Task Force 1 to scan the wreckage of the World Trade Centre for victims.

On Monday (6 June) she was euthanised at a Texas veterinary hospital, accompanied by her owner Denise Corliss.

As Bretagne made her last walk into the hospital she was saluted by representatives from the CY-Fair Volunteer Fire Department and Texas Task Force 1.

Draped in an American flag, she was later taken to Texas A&M University where vets will study the effects of Ground Zero on her body.

Speaking to the New York Daily News, a CY-Fair Volunteer Fire Department spokesman described Bretagne as “one of a kind” adding that she was eager to do searches, even after she retired.

In her final weeks at home, Bretagne spent much of her time completing a bucket list created by Mrs. Corliss and her husband.

The list included taking Bretagne back to a local elementary school where she used to accompany children during story time.

She also helped in the aftermath of Hurricane Katrina, one of the deadliest hurricanes to ever hit the United States, before retiring at the age of 10.