MRCVSonline cannot control these cookies from outside sources and we advise you to check with the relevant third party for more information..
Canine study offers insights into treatment of human OCD 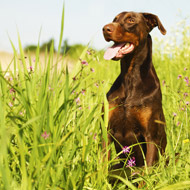 Researchers have uncovered genetic pathways in Doberman pinschers that increase the severity of canine compulsive disorder.

Published in the International Journal of Applied Research, scientists hope the discovery will lead to better therapies for the treatment of obsessive compulsive disorder in humans.

Lead author Nicholas Dodman from Tufts University’s School of Veterinary Medicine, said: “Dogs naturally suffer complex diseases, including mental disorders that are similar to those in humans. Among those is canine compulsive disorder (CCD), the counterpart to human obsessive compulsive disorder (OCD).”

OCD is listed by the World Health Organisation as among the 20 most disabling diseases. Estimated to affect around one to three per cent of people, the condition is often characterised by time-consuming repetitive behaviours and distressing thoughts.

CCD compulsions may include repetitive tail chasing, excessively grooming, and flank and blanket sucking. However, therapies for compulsion disorder in dogs are not as effective as they could be.