MRCVSonline cannot control these cookies from outside sources and we advise you to check with the relevant third party for more information..
Cannabidiol improves symptoms of canine arthritis, study finds 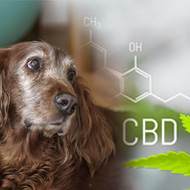 Arthritis affects one in five dogs.

Scientists measure the effect of CBD in dogs diagnosed with the condition.

Scientists in the United States have discovered that cannabidiol (CBD) can significantly improve the lives of dogs diagnosed with arthritis.

The researchers, from the Baylor College of Medicine in Texas, say their results could pave the way to studying the effects of CBD in humans.

In the study, the scientists first measured the effect of CBD on immune responses associated with arthritis, both in human and murine cells grown in the lab and mouse models. They found that that CBD treatment resulted in reduced production of both inflammatory molecules and immune cells linked to arthritis.

Next, the researchers found that in dogs diagnosed with the condition, CBD treatment significantly improved quality of life as documented by both owner and veterinary assessments. Scientists say their work, published in the journal PAIN, supports future scientific evaluation of CBD for human arthritis.

“We found encouraging results,” said Dr Matthew Halpert, research faculty in the department of pathology and immunology at Baylor. “Nine of the 10 dogs on CBD showed benefits, which remained for two weeks after the treatment stopped. We did not detect alterations in the blood markers we measured, suggesting that, under the conditions of our study, the treatment seems to be safe.”

Arthritis affects one in five dogs, and its prevalence increases as a dog ages, according to Canine Arthritis Management.

Twenty dogs from the Sunset Animal Hospital in Houston were employed for the study. The dogs' owners were given medicine bottles at random, containing either CBD, liposomal CBD, or a placebo. Neither the owner nor the vet knew which treatment each dog was receiving.

The dogs received the treatment each day for four weeks. The vet and the dogs' owners noted the condition of the dogs and whether they noticed any changes in their animal's level of pain, such as changes related to running or gait. The dogs' blood cell count, liver and kidney function were also evaluated before and after treatment.

“We studied dogs because experimental evidence shows that spontaneous models of arthritis, particularly in domesticated canine models, are more appropriate for assessing human arthritis pain treatments than other animal models," said Halpert. "The biological characteristics of arthritis in dogs closely resemble those of the human condition."