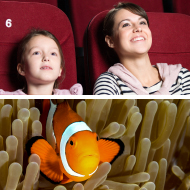 Global reports suggest the 2003 film Finding Nemo led to a surge in purchases of clown fish. This has since become known as ‘the Nemo effect’.

Researchers from the University of Oxford have challenged the idea that animal movies increase consumer demand for wildlife.

A new study, published in the journal Ambio, suggests the film Finding Dory had no impact on demand for blue tang fish, but online searches for that species did increase two to three weeks after the film’s release.

According to global reports, the 2003 film Finding Nemo led to a surge in purchases of clown fish, causing harm to animals and the environment. This has since become known as ‘the Nemo effect’.

Films and TV series featuring animals have long been said to influence consumer demand - from the 1996 film 101 Dalmatians, which is thought to have increased the popularity of Dalmatians, to films such as Harry Potter and Teenage Mutant Ninja Turtles, which are believed to have led to a spike in purchases of owls and terrapins respectively.

There have also been reports of a rise in ‘wolf type’ dog breeds following Game of Thrones and Twilight.

However, the team from Oxford said the Nemo effect is ‘largely unfounded’. Researchers looked at data on online search patterns from the GoogleTrends platform, compared to fish purchase data from a major US importer of ornamental fish and visitation data from 20 aquaria across the US.

They said they found ‘no substantial evidence’ of an increase in imports of blue tang fish to the US, or the number of visitors to US aquaria.

Lead researcher Diogo Verissimo said: “My research looks at demand for wildlife in multiple contexts. As such I was intrigued as to whether the connection between these blockbusters and demand for wildlife was as straight-forward as had been described in the media. My experience is that human behaviour is hard to influence, particularly at scale and it seemed unlikely that movies like Finding Nemo, Finding Dory and the Harry Potter series indeed generated spikes in demand for the species they feature.

“Our results suggest that the impact of movies is limited when it comes to the large-scale buying of animals. There is, however, a clear effect in terms of information-seeking which means that the media does play an important role in making wildlife and nature conservation more salient. This is particularly the case for animation movies which are viewed by a much more diverse group of people than, for example, nature documentaries.”

Commenting on the study findings, BVA junior vice president Daniella Dos Santos said: “This research presents interesting findings on the limited negative impact of popular films featuring wild animals on consumer behaviour. One of the top concerns for vets working with exotic species is a lack of owner awareness about their exacting welfare needs, so it is good that such films are playing a positive role in raising awareness about lesser-known wildlife.

“However, we are aware from similar studies on companion animals that there is a correlation between the popularity of certain species or breeds and their portrayal in films, which can also have the effect of normalising poor health and welfare issues. Our own survey has found that vets believe that media, including social media and advertising, plays a vital role in influencing clients when it comes to flat-faced dogs.

“Our key message for anyone looking to get a pet is to always talk to a vet for advice on the animal’s health and welfare needs.”