Cookie use on MRCVSonline
We use cookies to ensure that we give you the best experience on our website. If you continue without changing your settings, we will assume that you are happy to receive all cookies.
Accept Policy
Change cookie settings
Gene study offers hope for treating fatal illness in children and dogs 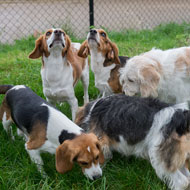 Using SingleCut CRISPR gene editing, they managed to modify the dogs’ own DNA so they began producing dystrophin again.

Doctors and vets team up to study Duchenne muscular dystrophy

Vets and medics say they have made a significant breakthrough in the search for a treatment for Duchenne muscular dystrophy (DMD) - a fatal disease that affects children and dogs.

Scientists from the Royal Veterinary College and UT Southwestern Medical Centre used gene editing techniques in dogs, to restore the production of a protein that is absent in DMD patients.

DMD is the most common fatal genetic disease in children and it also occurs in many dog breeds. Patients with the disease produce almost no dystrophin, a protein that helps to protect muscle fibres and the heart when they contract. As a result, the patient’s muscles are damaged, leading to an inability to walk, skeletal deformities and heart failure.

The team said they may have come up with a single intravenous injection to treat the most common genetic mutations.

A naturally occurring mutation in the dystrophin gene was found in a dog that was being treated at the RVC’s Small Animal Referral Hospital, and the team are now working with the dog’s relatives. Using SingleCut CRISPR gene editing, they managed to modify the dogs’ own DNA so they began producing dystrophin again.

In a dog that received the highest dose, the cardiac muscles restored dystrophin protein to levels up to 92 per cent of the normal amount after treatment.

Scientists believe this is the first time this type of gene editing therapy has been used after birth in an animal larger than a rodent. It is hoped there will be a human application, after long-term research, efficacy and safety testing.

Richard Piercy, professor of comparative neuromuscular disease at the RVC, said: “There is more work to be done, but with this exciting breakthrough, we feel we are a significant step closer to finding an effective treatment.

“A great many genetic diseases affect humans, dogs and other species - many, like DMD - with tragic consequences and this form of gene editing treatment might well be applicable in many of them. We’re hopeful that we’re paving the way for future research into treating some of the most serious genetic conditions that affect us today.”

Preliminary findings have been published in the journal Science.