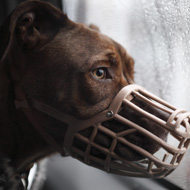 Pitbull type Mason cannot get pet insurance as he is on the exemption list. He has had such an impact on his local community that when he was injured, they rallied round to pay for his treatment.

The government is coming under increasing pressure to repeal breed specific legislation (BSL) as another damning report suggests it has failed to improve public safety.

Releasing its report today, the RSPCA called for a government inquiry into the effectiveness of BSL, which was introduced with the Dangerous Dogs Act 25 years ago. Section one of the act prohibits four types of dog - the pitbull, Japanese tosa, fila braziliero and dogo argentino.

The report makes 15 recommendations, including calls for BSL to be repealed as it has failed to reduce the number of dog bites and eliminate prohibited types of dog, as it was designed to do.

Instead, the RSPCA says the number of prohibited dogs is continuing to rise and figures show dog bite incidents are on the incline, with 7,227 hospital admissions in England between 2014 and 2015, compared to 4,110 in 2005.

There are also fears that the legislation is causing a number of unintended harms, including serious dog welfare concerns, burdens on police and animal welfare charities and stress for the families of seized dogs.

The RSPCA has been forced to euthanise 366 dog identified as 'type' in the past two years alone, including those that could have been rehomed. The report raises concerns about compromised animal welfare during the process of seizing and kennelling dogs, often for extended periods of time.

While BSL is used in many countries, the report says there is a lack of evidence to support it and three European governments and many US administrations have abandoned it. A number of other countries, including Canada, have managed to reduce dog bites using other approaches that focus on responsible dog ownership.

As a result, the RSPCA has made a number of recommendations focusing on better education (particularly of children) and legislation recognising that any dog can bite, regardless of breed or type. While section one of the act is still in place, steps must also be taken to allay concerns about dog welfare - for example, allowing more opportunities for rehoming and speeding up the processing of cases.

"The RSPCA believes believes it is paramount for the government to launch an inquiry into the effectiveness of BSL, assess other options to improve human safety and dog welfare, and ultimately repeal the breed specific part of the legislation."