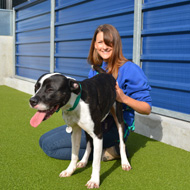 Battersea has published photos of 25 banned dogs it has been forced to euthanise in the past year. Three-year-old pit bull Kyzer arrived at Battersea on 21 July and was put to sleep on 29 July.

The government is being urged once again to put an end to breed specific legislation, as a new report suggests it is ineffective in reducing the number of dog attacks.

Battersea Dogs and Cats Home says it took in 91 pit bull terrier types last year. Its behavioural experts believe 71 per cent of these could have been rehomed but, as the legislation prevents this, the charity was forced to euthanise them.

Over 200 of the UK's canine behaviour experts were surveyed by the charity to identify the most common causes of dog attacks. The findings were released this week in a new report, What's breed got to do with it?.

Nearly three quarters (74 per cent) of the behaviourists said the breed of dog is either irrelevant or only slightly important in determining aggression levels. For those who did believe breed was an important factor, there was little agreement on which breeds were more likely to be aggressive. All in all, 17 breeds or breed groups were mentioned, including border collies, German shepherds, Jack Russell terriers, Chihuahuas and bull breeds.

Experts pointed out that some breeds require more exercise and stimulation. Therefore, if these needs are not met by the owner, there is a greater risk of frustration and behavioural problems.

Dog socialisation, however, was cited as the most important factor in determining aggression. Eighty-six per cent of experts said the way the dog is brought up by the owner is 'very important', while 73 per cent highlighted its upbringing by the breeder before sale.

Other very important reasons given for dog aggression were pain (due to injury or a medical condition) and fear (if the dog is anxious or fearful by nature, or has suffered a traumatic experience in the past).

The majority of experts (89 per cent) dismissed the idea that size is a factor in a dog's behaviour.

When it came to answering questions on how to prevent dog attacks, nearly all experts (98 per cent) said they believed adding more breeds to the banned list would have no effect. Eight-seven per cent felt it would be helpful to educate the public on reading dog body language. There was also support for new laws to hold irresponsible owners to account, with the majority wanting to see compulsory training of new dog owners and a requirement for all breeders who sell dogs to be registered.

Commenting on the research, Battersea said dogs are not the only victims of the law. Since 1991, there have been 30 fatal dog attacks involving 16 children and 14 adults and NHS hospital admission figures show there were 7,227 hospital admissions for dog bites last year.